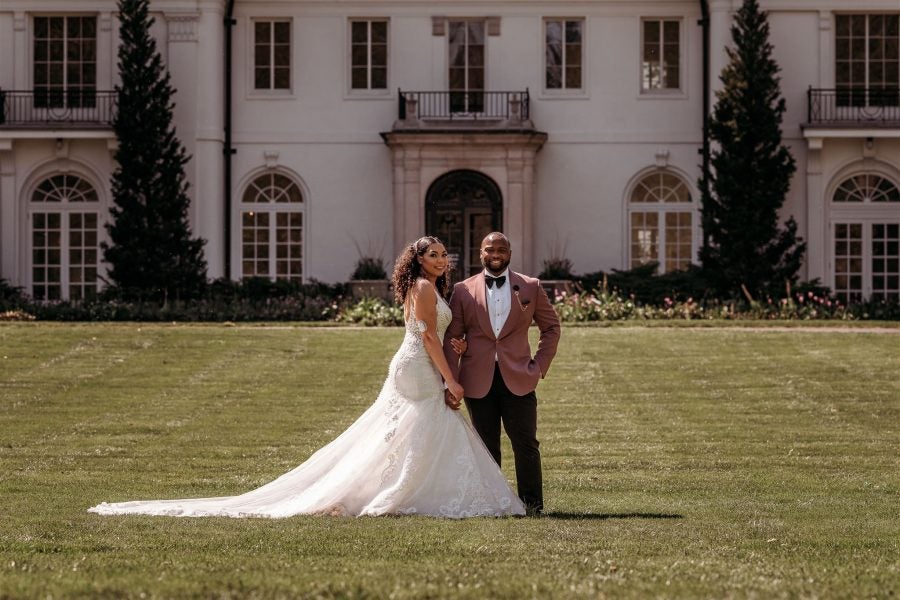 “You can’t get anything past Iman,” says Anthony Quarles of his effort to propose to his then-girlfriend, now wife of two months, Iman, while they lived in Boston.

“I had been scoping out the perfect place to propose for a couple of weeks on my lunch breaks. We were new to Boston so I had no clue but felt Christopher Columbus Park was the ideal space due to the beautiful florals and greenery.  So I disguised the proposal with my first work event at my new job.  She claims she knew regardless!”

But whether she had an inkling or not that Anthony was going to ask for her hand, it didn’t change how touched Iman was by the moment. When he got down on one knee by a park as they walked to the work event, the joy she felt, knowing the journey they had been on was headed down the aisle, overwhelmed her in the best way.

“I was brought to tears by how happy I was,” she says. “We had been together for almost 10 years — had grown up and gone through so many phases of life with each other — that it just felt so right to start our forever in that moment.”

Iman and Anthony were raised in the same town in Southern Indiana, but they didn’t meet until a mutual friend brought them together as they planned for and prepared to go to college. The connection that was created then only grew stronger despite the ups and downs of life, and it all culminated in them finally getting to say “I do” in a beautiful ceremony on May 1 in Indianapolis. They celebrated their love with 60 of their closest family and friends at the venue BASH, which was filled with greenery (which they both adore), flowers, lights and a whole lot of love. Take a look at the breathtaking images from their big day and learn more about their planning process and how they’re settling into and loving married life.

How She Knew She Found the One

“There wasn’t one big moment that changed my perspective on him, but rather, a constant series of little moments that happened on any given day that made me realize he is my perfect complement,” Iman says of realizing Anthony was the one for her. “He is accepting and loving and brings a sense of ease, calm and patience to every moment that just makes life more enjoyable.” 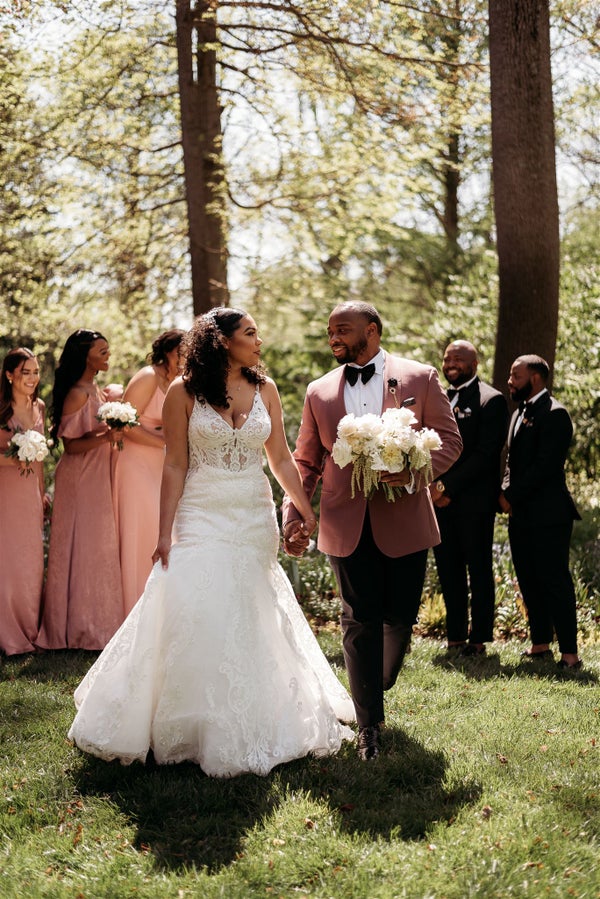 We love this shot of the bride’s gown and the groom’s ensemble hung up side by side before the ceremony and reception! 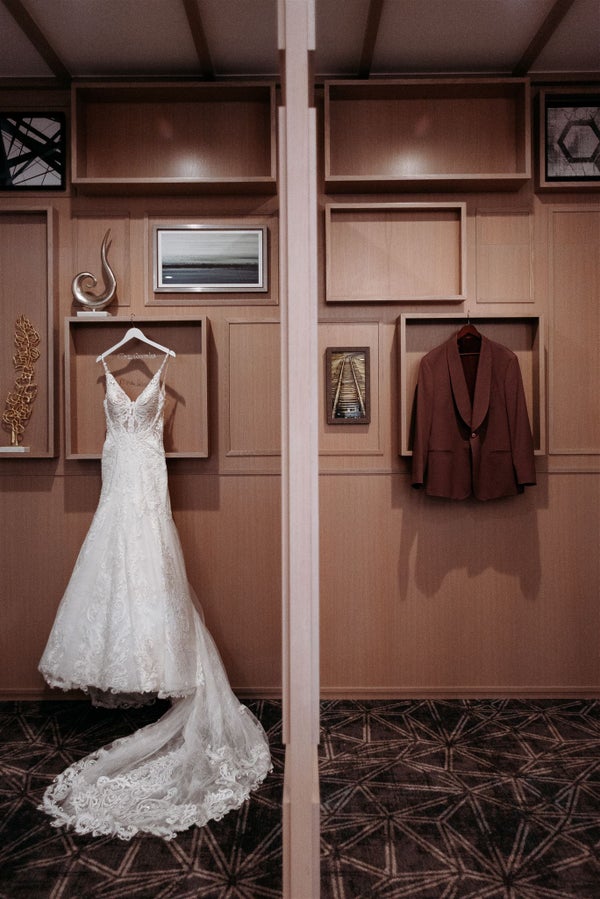 “As soon as I saw our venue, I was sure that was where we should get married. Anthony, however, took a bit more convincing (good thing I’m in sales lol),” Iman says of their venue, BASH. “It was the ultimate blank slate for us to bring our vision to life. We didn’t really have a theme, but knew we wanted it to be intimate, romantic, classic and full of greenery, florals and candles.” 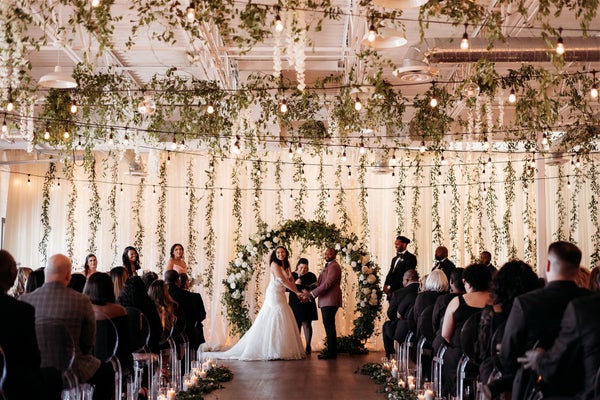 Peacefulness Before the Party

The fun cake, which matched the floral and greenery theme, was crafted by Classic Cakes in Carmel, Indiana. 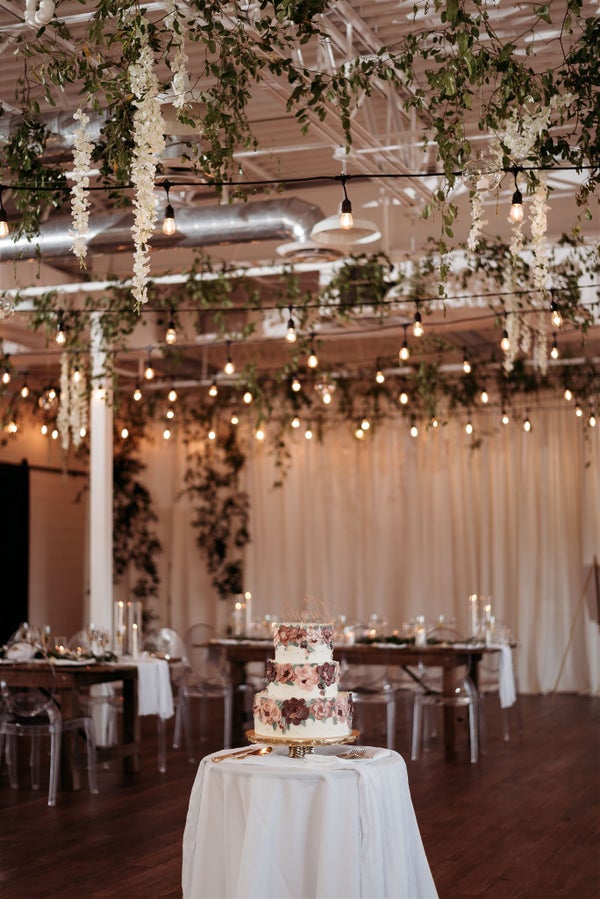 The Most Memorable Moment for the Bride

“The moment that stands out was when we exchanged our vows,” she says. “Anthony’s vows were truly representative of who we are as a couple and how he felt about me. I was blown away by his eloquence, thoughtfulness and humor and it felt so good to hear how loved and cherished I was. It was obvious to everyone how much time, effort and attention went into them.” 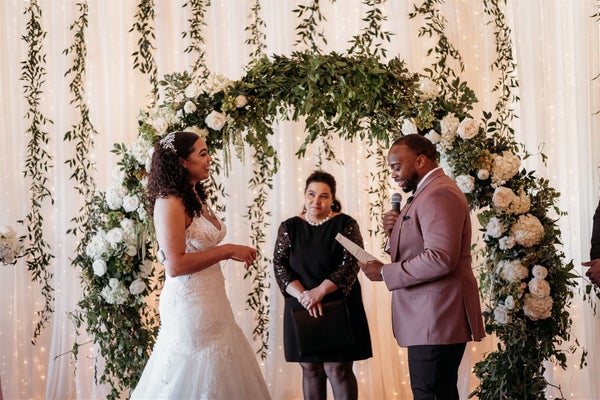 The Most Memorable Moment for the Groom

For Anthony, seeing his longtime love in her beautiful bridal gown for the first time was what sticks with him most from their wedding day.
“I had seen the dress hanging in our home for weeks and curiosity was getting the best of me,” he says. “I had visions and dreams of what she would look like on our special day and she did not disappoint!  A kid at the museum where we took our pictures said she looked like a princess and I could not have agreed more.  Her dress was beautiful, classy, and breathtaking … just like Iman.” 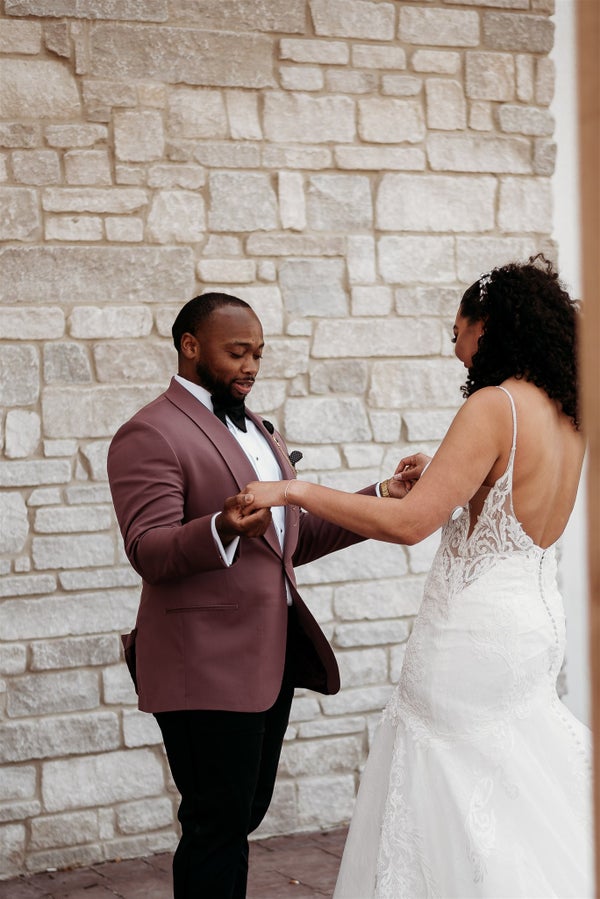 When He Realized She Was His Perfect Match

For Anthony, he said the love Iman constantly showed him made him aware that she was meant to be his wife. “There were many signs that Iman was the one for me.  She has always made me a priority and has encouraged me to be better than I ever imagined I could be. Her ability to love me unconditionally and allow me to be my authentic self means the world to me.  These things are not easy to find in life, so I knew she was the one for me.” 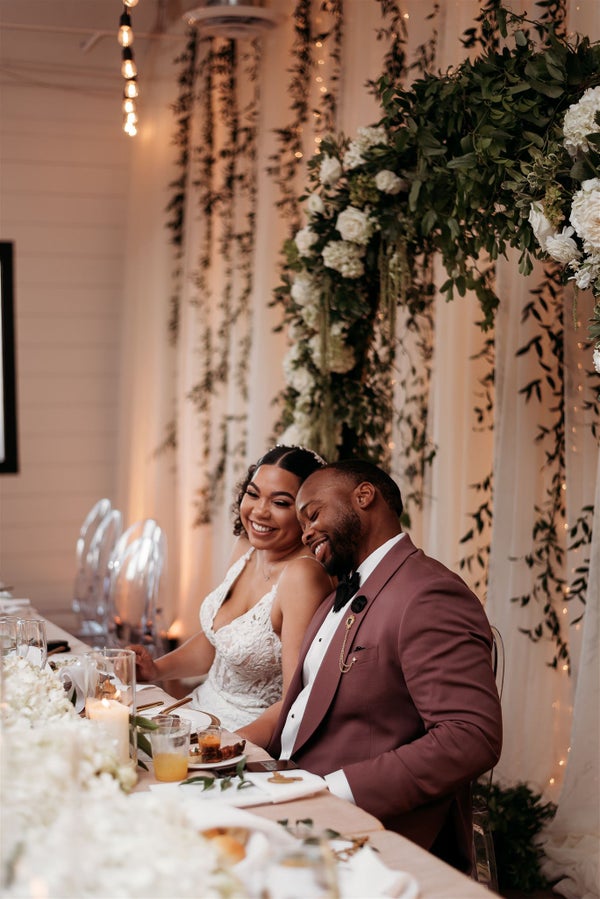 After saying “I do” on May 1, the couple continued to celebrate their love, traveling for their honeymoon to both Antigua and the Dominican Republic. 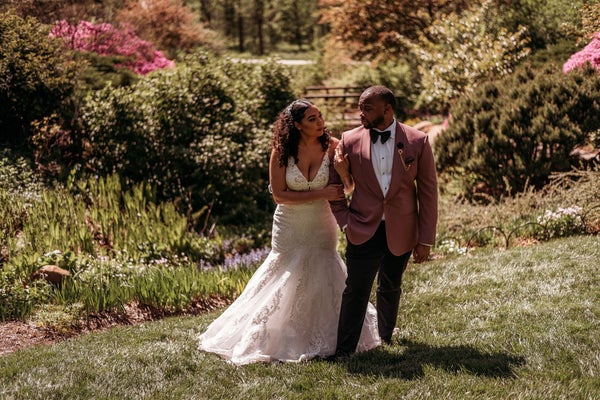 The Bride and Her Tribe

Iman says having someone to bring such joy and peace at the same time to her life is something she’s grateful for.
“With my career, our life is always changing but the one thing that stays the same is us,” she says. “I feel blessed to have him as my constant in this crazy life.” 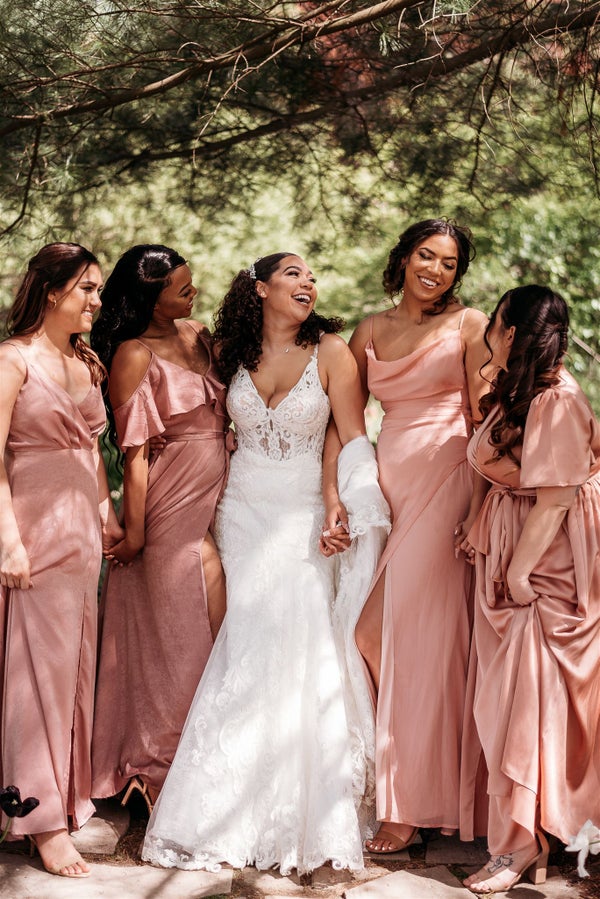 The Groom and His Men

When asked how he would say settling into married life has been, Anthony says, “Married life has been similar to our lives before the wedding. Filled with love, adventures, and creating a lifetime of memories.” He looks forward to “creating new memories in this chapter of our lives!” 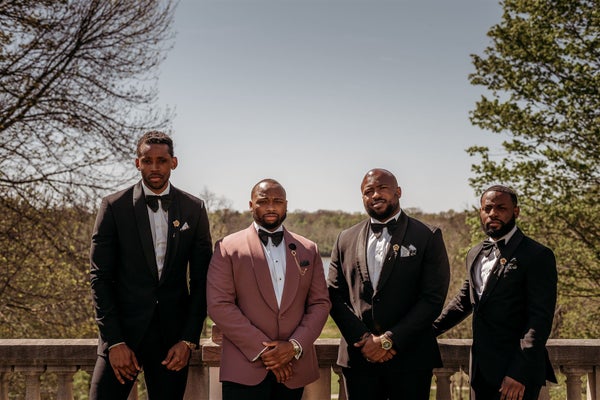 Down the Aisle With Dad

Iman took everyone’s breath away when she made her big entrance during the ceremony. 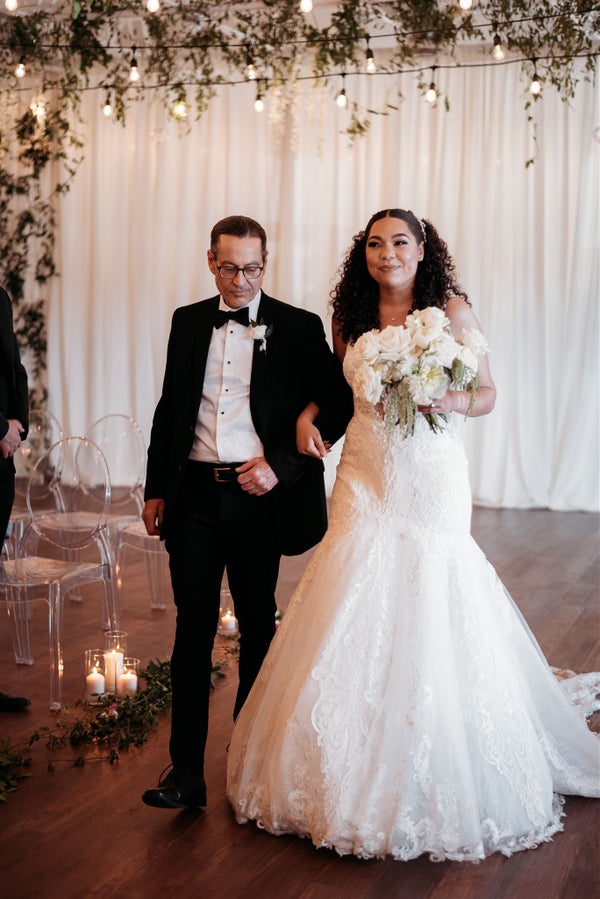 The couple, captured here at a museum they took their couple and bridal photos at, have made plenty of changes since they married. They moved, bought a house, a couple cars and started new jobs just in the two months since the big day. 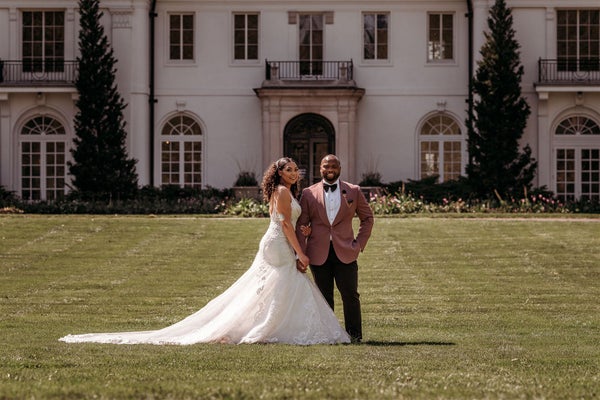 Despite having to chop their wedding guest count, the couple were thankful that they had the chance to keep their wedding date despite COVID. They also appreciated the people who were able, despite everything going on, to be present for their special moment.
“In the end, planning during the pandemic made spending the day surrounded by all of our closest friends and family that much more special. It was important for us that things were flawlessly executed and it be a fun, memorable night for our loved ones. Although we reduced the guest count, it did not keep the reception from being one large party!” 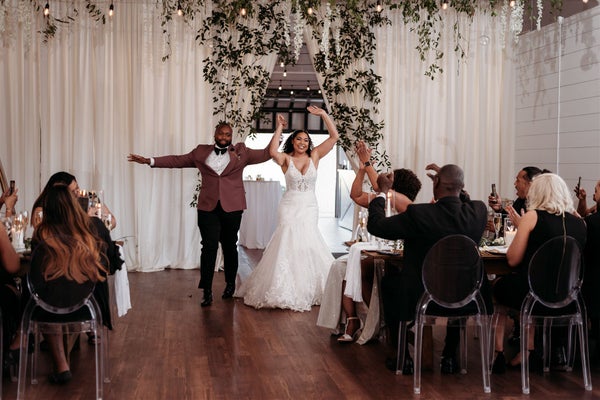 Want your wedding to be considered for feature in Bridal Bliss? Email us your photos and a brief story of your love at [email protected]